Can my students use their skills in real-world situations?  Heck, can they use their skills in combination with any single other skill in the curriculum?  When I was redesigning my grading system, I needed a way to find out.  It’s embedded in the “levels” of skills that I use, so I’ll explain those first.

What are these “levels” you keep talking about?

For every curriculum unit, students get a “skill sheet” listing both theory and shop skills.  Here’s an example of the “theory” side of a unit of my Electric Machines course.  (For a complete skills sheet, showing how theory skills correspond to shop skills, and the full story of how I use them, see How I Grade).  If I were starting this unit over, I would improve the descriptions of each skill (“understand X, Y, and Z” isn’t very clear to the students) and make the formats consistent (the first four are noun phrases, the last one is a complete sentence; things like that annoy me).  But this should give enough info to illustrate.

Realistically, all skills involve synthesis.  The levels indicate complexity of synthesis, not whether synthesis is involved at all.  My goal is to disaggregate skills only as far as I need to figure out what they need to improve — and no further.

For example, in the unit shown above, wound-rotor induction motors are at level-2.  That’s because they’re functionally almost identical to squirrel-cage motors, which we studied in the previous unit, and the underlying concepts help students understand the rest of the unit.

Quiz question: List one advantage and one disadvantage of wound-rotor induction motors compared to squirrel-cage motors.

Danger: a student could get this wrong if they don’t understand wound-rotor or squirrel-cage motors.  But the question is simple enough that it’s pretty clear which one is the problem.  Also, I have a record of the previous unit on squirrel-cage motors; both the student and I can look back at that to find out if their problem is there.

Synchronous, split-phase, and universal motors require a solid understanding of power factor, reflected load, and various ideas about magnetism (which the students haven’t seen since last year, and never in this context) so that puts them at level-3.

Quiz question: Synchronous motors can be used to correct power factor.  Explain  in 1-2 sentences how this is possible.

The level-4 skill in this unit is to evaluate a type of motor for a given application.

Quiz questions: “Recommend a motor for [scenario].  Explain why.”  Or “you need to replace a 3-phase AC motor.  Give 3 questions you should ask to help you select the best type.  Explain why.”

Why this is an improvement over last year

Last year I would have put only the level-4 problem on a test.  The solutions were either excellent or incoherent.  I couldn’t help people get better, and they couldn’t help themselves.

You’ll notice that there are no level 5 skills on the skill sheet, even though the unit is graded out of 5.  Level 5 is what others might call “Mastery,” where Level 4 might be called “Proficiency.”  I teach up to Level 4, and that’s an 80%.  A Level 5 question is the name I give to questions that are not exercises but actually problems for most of the class.  There are a number of ways to get a 5/5.  All of them include both synthesis and a context that was not directly taught in class.  So the main difference between L4 and L5 isn’t synthesis; it’s problem-solving.

I occasionally put level-5 questions on quizzes; but not every quiz.  I might do it to introduce a new unit, or as a way of touching on some material that otherwise we won’t have time for. Other ways to earn a level 5: research a topic I haven’t taught and present it to me, or to the class.  Build something.  Fix something.  I prefer these to quiz questions; they’re better experience.  So I put examples of project topics on the skill sheet.  I also encourage students to propose their own topics.  Whether they use my topics or theirs, they have to decide what exactly the question is, how they will find the answer, and how they will demonstrate their skill.  We’ve had a ton of fun with this. I’ve sometimes put questions on quizzes that, if no one solved them, could be taken into the shop and worked on at your leisure. 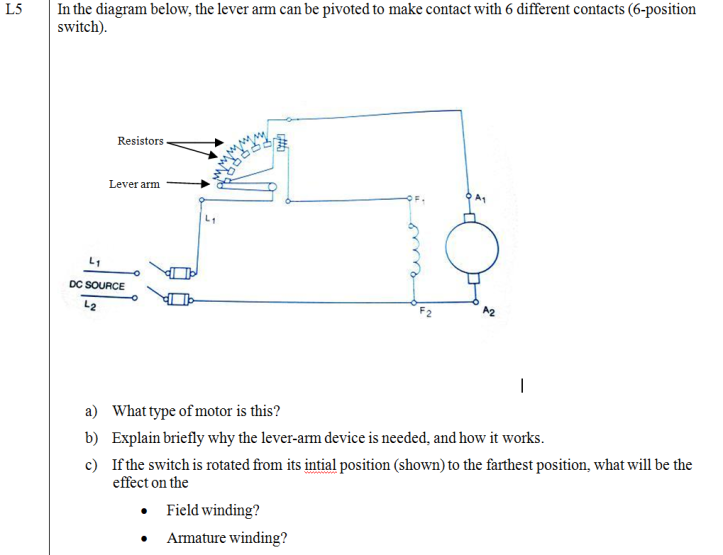 This is a reduced-voltage manual starter on a DC shunt motor.  If I gave this question now, it would be trivial, because we’ve done a whole unit on starters.  But it was on a the second quiz of the semester, when the students had barely wrapped their heads around DC motors.  It’s a conceptually tough question because the style of drafting is unfamiliar to my students, there’s an electromagnet sealing-in the switch that doesn’t make sense unless you’re thinking ahead to safety hazards caused by power failures, and we hadn’t discussed the idea that there was even such a thing as a reduced-voltage starter.  But we had discussed the problem of high current draw on startup, and the loading effect that it causes, and the dangers of sudden-startups of machinery that wasn’t properly de-energized.  Those are the problems that this device is intended to solve.  One student got it.

Here’s one that no one solved, but someone built later in the shop.

Draw a circuit, with a square-wave power supply, where the capacitor charges up almost instantly and discharges over the course of 17 ms.

You may use any kind of component, but no human intervention is allowed (i.e., you can’t push a button or pull out a component or otherwise interfere with the circuit).  You do not need to use standard component values.

This requires time-constant switching, which means combining a diode and a capacitor.  They had just learned capacitors that week in one course, and diodes the previous week in a second course.  The knowledge was pretty fresh, so they weren’t really ready to use it in a flexible way yet.  But the diode unit was all about time-constant switching, and it’s a hard concept to get used to, so this question got them thinking about it from another angle.

Other examples: find total impedance in a parallel circuit, when all we’ve studied so far is series circuits.  If  they followed the rules for parallel resistance that we studied last year, it will work out; but they had just learned vectors, many of them for the first time, so most people added the vectors (instead of adding the inverses and inverting).  Or, find total impedance of a resistor-capacitor-inductor circuit, when all we’ve studied is resistors and capacitors.  Amazingly, most of the class got that one.  I was really impressed.  Again, it’s a question where the conclusion follows logically from tools that the students already have; but they might have to hold the tool by the blade and whack the problem with what they think is the handle.